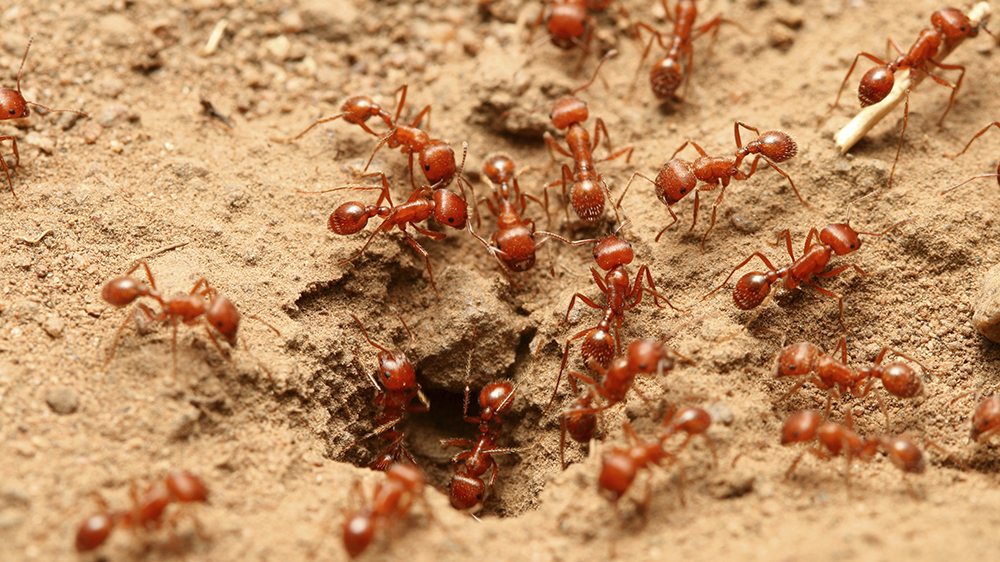 All stinging red ants are generally referred to as fire ants, and all are much more aggressive than other red ant species. Not only do they sting and bite, they are capable of killing small animals, which they carry back to their nests for later consumption; in addition, they harm plants. Though human deaths from fire ant bites are rare, they have occurred in the past; never step on a fire ant nest, since this will put them into a frenzied attack mode and leave you covered in painful bites.

Fire ants are terribly resilient, and they move into new habitats quickly. They are capable of surviving in below-zero weather as well as in very hot weather, and queens are capable of living for as long as seven years. Some methods for getting rid of ants, such as pouring boiling liquid into the colony entrance, do not work on fire ants; some methods will kill workers, but won’t completely eradicate the colony – the queen and any remaining workers will simply move to a new location.

Fire ants tunnel underground and create several interconnected mounds, so it’s vital that you locate all mounds before waging war against the ants.

How to Get Rid of Fire Ants

There are several ways to eradicate fire ants. While some take just a few hours, others can take as long as a few months, depending on how many fire ant mounds have sprung up around your property. Ask your neighbors to look for fire ants on their property as well, and get as many people involved in the eradication effort as possible; this will greatly increase your chances of getting to the queen and stopping the infestation once and for all.
The first and most important step in getting rid of fire ants is to choose a product that is designed to kill only fire ants and to leave the remainder of the indigenous ants alive. Though this may seem counterintuitive, indigenous ant populations are pollinators, they often aid in controlling garden pests, and they slow the spread of fire ants. Perhaps worst of all, if you kill the indigenous ants along with some of the fire ants, the remaining fire ants will be able to feast on the carcasses of their enemies, ultimately adding strength to their own colonies. Commercial baits should only be used as a last resort unless they are specifically labeled for use against fire ants only.

The second step in eliminating fire ants is to begin targeting them directly, using care to treat each mound. You can mark mounds with small landscaping flag-type markers from a DIY store to ensure you are methodical in your approach, and to ensure that you don’t miss any of the ants. Wearing rubber boots that have been lightly coated in Vaseline or other grease will help keep the ants from crawling up your legs and biting you while you are working. The following baits have been proven effective against fire ants:

Now that you know how to get rid of fire ants, you can also take action to prevent them from entering your home in the future. An easy but effective way to do this is to place laundry detergent or dish soap into a bucket and add a little water so that it will be easy to pour, but not completely diluted. Pour this mixture around the outside of the house, around the foundation. Pay special attention to any cracks.

In cases of severe fire ant infestation, it may be best to contact an exterminator, particularly if the ants are aggressively attacking you, your family, pets, or livestock. If you do decide to work with an exterminator, get bids from a few companies before deciding which to choose.