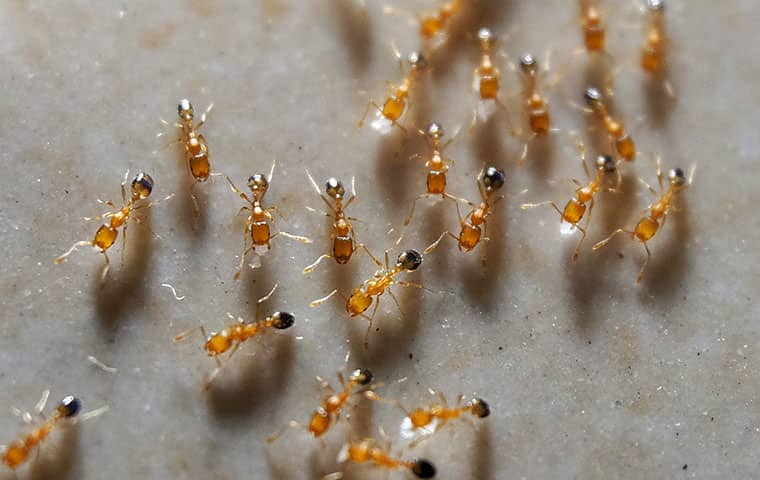 Pharaoh ants, Monomorium Pharaonis, are small insects, measuring just about 2 millimeters long on average. They have pale yellow bodies, and their abdomens are marked in a red and black pattern. This ant species is one of the most invasive, and it’s also extremely difficult to control. The largest colonies can consist of several million worker ants along with thousands of queens.

A colony of pharaoh ants benefits greatly by having such a large size. The sheer numbers of workers and queens make it extremely easy for these pests to move from one place to another if disturbed. Worse yet, they reproduce rapidly. Pharaoh ant queens live for up to a year, continually laying eggs that mature into adults in 38 days.

As a pharaoh ant colony grows, it gradually extends its boundaries by a process called budding. This involves a single queen and a team of worker ants migrating out to form a new colony on their own. These ants are not horribly picky about nesting sites. They can nest in cabinet voids and walls, behind baseboards and trim, inside refrigerator insulation, and in all kinds of other dark spaces where the odds of being disturbed are minor. Pharaoh ants have even been known to set up colonies inside hollow curtain rods and in cupboards where items are rarely moved.

When a colony of pharaoh ants is disturbed, the ants usually scatter. If they’re sprayed with a toxic pesticide, they typically travel as far away from the toxin as they can before beginning life anew elsewhere.  They’ll often retreat in the presence of ant baits too, with some members of the colony dying and others surviving to breed another day.

Although pharaoh ants are a tropical species, the insects have traveled far and wide due to their ability to take advantage of controlled indoor climates. They are common in hospitals and rest homes, hotels, apartments, restaurants and grocery stores, and other buildings including homes. These tiny ants will eat just about anything; they have been known to gnaw into toothpaste tubes and shoe polish bottles, eat rayon and silk, and even consume rubber goods. They do prefer sweets, so if a food source such as honey, peanut butter, or plain sugar is available, that’s what they’ll go for.

Controlling pharaoh ants is best achieved via prevention. Keeping cracks sealed, keeping food and other items well-contained, and staying well-organized are a few prevention methods anyone can use. Trying to eliminate them without the help of an exterminator can be tough, particularly once they are well-established. If you notice a large colony on your property, have it assessed immediately as it will simply continue to grow unchecked if ignored.