A lot of folks know that fleas are a real nuisance to pets and even to the people who live in a house or apartment that is infested with fleas. But a lot of people are unaware that fleas can carry and spread sickness and life threatening diseases to both pets and people.

Can Flea Bites Make You Sick

Fleas crawl and bite, and these actions alone can make a person or pet, scratch at their skin a lot. This scratching can easily lead to open wounds and sores and infection. This is just the simplest problem that fleas can cause pets and people, it gets a lot worse.

Fleas often are like hitchhikers, in that they may live on one host or creature for awhile then, hop and travel until they find another. A flea that finds it’s way to your pet or you, may have fed on the blood of a raccoon, opossum or even a rat. Now if that flea bites you or a pet, it can spread the same disease the rat or other animal was carrying.

Cat Scratch Fever – Fleas that are living on a neighbors cat that has cat scratch fever, can pick up the disease from the animals blood. Then they travel to your cat and feed on it’s blood, giving them the same disease. Later when your cat licks your mouth, or if it scratches or bites you, you may find youself with cat scratch fever. Fleas that live on the cat and are infected, leave their poop in the cats fur. When you pet your handle the cat, your fingers and hands become contaminated, then when you rub your eyes or pick your nose, etc, it’s possible to spread the disease to yourself.

Typhus – Fleas that feed on rats that have Typhus, travel to pets and feed off them and humans. The poop from these infected fleas gets into the mouths and wounds of humans, from petting their pets, and getting bit by the fleas themselves, and having the flea poop get into open scratches and sores, infecting the person with typhus. Typhus can also be gotten by a human, who is even exploring or living in an area where there are lots of dead fleas, or even old cat feces. 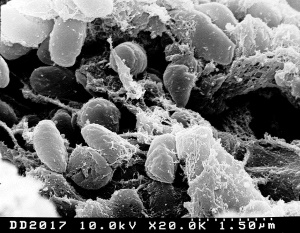 Bubonic Plague – When a flea feeds on an infected animal that has the plague, it can transfer this serious disease to humans when it bites. The fleas can also infect pets, and in turn these pets can transfer the plague to humans.

Tapeworms – Another nasty disease or condition that fleas can give to humans and pets, is Tapeworms. Fleas act like the hosts of tapeworms, and infected fleas can pass these tapeworms to humans when they feed off their blood.

Flea bite symptoms may include the following:

itchiness – the fleabite is known to be very itchy and often needs to be treated with aloe vera gel to ease the itchiness. This is attributed to the flea saliva as it injects into the wound when it bites its victim.
red swelling– the bitten spot in most cases turns into a swollen red spot moments after being bitten
Tiny wounds– after scratching the bite bumps; they burst and develop into small open wounds.
Itchy legs and feet– the fleas are flightless but hop from place to place. They, therefore, find low targets such as legs and feet very lucrative.
Hypersensitivity– this is after scratching the affected areas until they become sore and highly sensitive to touch.
Secondary infections– the person may suffer from secondary infections due to excessive scratching and wound exposure to external environments.