Flies are insects in the Nematocera or Brachycera suborders of the order ‘Diptera.’ Diptera comes from Greek and mean two (Di) wings (Ptera). There are thousands of other insects with two wings. One of the main difference of flies in the Diptera order is that they have two wings for flight and two wing-like knob structures that are flapped rapidly during flight and act as gyroscopes, helping the fly balance in-flight. There are many species of insect with the word ‘fly’ in their name, but generally true flies of the Diptera order are written as two words. For instance fruit flies, crane flies, and flesh flies are ‘true’ flies; butterflies, dragonflies, and sawflies are not. Of the hundreds of thousands of families in the Diptera order, flies comprise nearly two hundred.

Flies are small and have short aerodynamic bodies that allow for fast takeoff and flight and very rapid changes in direction. The have large ‘compound eyes’ that give them an extraordinarily large range of vision, which is highly useful in evading threats. Flies have no teeth or equivalent thereof and are therefore unable to consume solid foods. They eat liquid food or very finely ground small pieces of solid foods. Flies are extremely effective at mating and, for that reason, fly infestations can very rapidly reach very large sizes. Female flies lay their eggs as close as possible to their source of food and very often inside the food source itself. Eggs hatch into larvae (also known as maggots), which consume the food source around them rapidly. After about a week, the larvae transform into pupae, out of which the adult fly is then hatched. Adult flies have short life spans ranging from a few days to a month, depending on the species. The adult fly’s life is spent searching for new food sources and reproducing.

Flies in populated areas are a serious health concern. Flies have small bristles all over their bodies to which hundreds of pathogens and diseases ranging from colds and flus to typhoid and cholera can attach. In addition, their taste for garbage and animal wastes means they spend most of their time in areas where diseases are common. Flies generally stay near their birth areas, but are capable of migrating several miles in the search of food and, as such, can be very efficient transporters of disease. For this reason, it is crucially important to identify and control a fly infestation as soon as it is noticed in the home, the business, or in agricultural contexts.

If you have a fly infestation in your house, it is important to identify what type of fly you are dealing with. There are hundreds of species of flies, but a few are more common:

There are several species of flies across the world known as fruit flies. Fruit flies feed on decaying fruits and vegetables and are thus often found in houses (particularly in kitchens and garbage areas), restaurants, and hotels. They are also common agricultural pests. The flies are generally tan or beige colored, are small (around 1/8th of an inch) and are ovular in shape. Depending on the species of fruit fly, they may have darker abdomens or black horizontal stripes across their abdomen. Fruit flies have short lifespans (roughly thirty days in ideal conditions) and thrive in hot weather (low eighties Fahrenheit). Females lay up to four hundred eggs at a time directly into rotting fruit, vegetables, or fungi.

The common house fly is one of the most prevalent flies in domestic settings around the world. Certain studies have shown that it accounts for over ninety percent of all flies in human-habited areas. Beyond its prevalence amongst flies, it is also one of the most common insects in the whole world. Significantly larger than fruit flies, house flies can reach half an inch in length. They are grey in color and have black stripes that run vertically over their backsides. House flies feed on liquid and well refined substances found in garbage, feces, and other decaying materials. Their ideal place for laying eggs is in feces, and the species is prevalent on farms due to their affinity for horse manure. The flies are active only during the day.

Horse Flies (often confused with Deer Flies) are relatively large blood sucking flies ranging from ¾ of an inch to 1-1/4 of an inch in size. Female horse flies feed only on blood (mostly mammalian) and male horse flies feed on pollen and nectar. Horse flies are large, very noisy in flight, and can have a painful bite. For this reason, and due to the fact that they can carry disease, they can be serious pests to people and animals. A horse fly feeds by cutting open the skin with its mandibles and then sucking on blood from the wound. Horse fly bites can be painful, itchy, and often will swell.

Horse fly eggs are generally laid on plants or stones close to water. Once the eggs hatch and become larvae, they feed on nearby insects. Horse and Deer flies are notoriously hard to control by conventional methods. However, it is important to know that more so than other flies, they avoid colder temperatures.

As noted before, there are hundreds of families of flies containing hundreds of thousands of species. Flies including the flesh fly, stable fly, lesser house fly, robber fly, and crane fly are only some of the common flies found around the world. Each fly has its own unique characteristics, including different feeding and reproducing habits. While this is the case, and while it is important to find out which kind of fly you are dealing with in an infestation, the three mentioned earlier (fruit fly, housefly, and horse fly) are the most common types to find in an infestation. 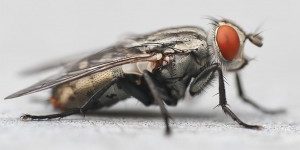 Luckily for anybody with a fly problem, the truth is, excepting in cases such as agriculture or large hotel / restaurant kitchens, getting rid of flies is actually pretty easy. … 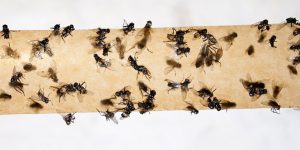 In order to understand a fly infestation, it is important to understand what causes one. Flies lay eggs in batches of hundreds. One female fly can lay thousands of eggs …