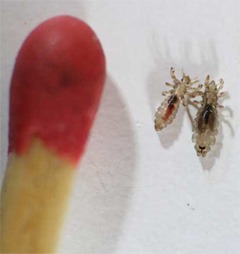 Head Lice (Pediculus Humanus Capitis) are a subspecies of the Phthiraptera order. They are wingless parasites that spend their whole lives exclusively on human scalps and feed by biting the skin and sucking blood. Head lice feed only on humans and cannot be transferred to or from animals. The lice are related to body lice and distantly related to pubic lice, but will not generally reproduce with either species. Unlike body lice, which can carry dangerous diseases, head lice, though a nuisance, are generally harmless. A head lice infestation (known as Pediculosis Capitis) causes itching and, if the bites are scratched frequently, can lead to open sores that can become infected. Head lice can be treated and eradicated effectively without too much difficulty.

Head lice are between one to three millimeters long (roughly the size of a sesame seed) and light gray in color. After feeding, they become darker and can take on a reddish tint. Females are larger than males. Head lice are visible to the naked eye but can be difficult to spot on a head full of hair. The insects are flat and are made up of three fused but visibly separate parts, a head, thorax, and abdomen. After feeding, they excrete a small dark red dirt-like spot known as frass. A female head louse can lay around five eggs per day. Head louse eggs, known as nits, at slightly less than a millimeter long and are a light brown color. After the egg hatches, it becomes white. Nits are laid near the base of the hair. In warm temperatures the may be laid as far as a few inches down the length of the hair as the lice will feel more comfortable leaving the heat of the body. The female sticks eggs to the hairs using a sticky substance produced in her reproductive organ.

Head lice in every stage of the lice lifecycle are bloodsuckers and will feed four to five times daily. To feed, a louse pierces the skin, injects an anti-coagulant, which prevents the blood from drying and makes feeding easier, and then sucks in the blood. Though head lice can live on any part of the scalp, they prefer darker areas and avoid light. For this reason they are often found behind ears and on the back of the neck. Lice’s legs are specially adapted to holding onto hairs and they are unable to fly or jump. The most common way in which head lice are transferred between people is with direct head to head contact. It is also possible for lice to travel in hats, combs, towels, etc., but this is much less likely as lice die quickly when not on a host.

Pediculosis Capitis is the scientific term for a head lice infestation. Lice bites cause a very mild reaction and the bites themselves can be seen only with difficulty between hairs. People with longer hair are more likely to have visible bites as they may have bites on the back of their necks where the hair drapes down. When the hair is moved aside, bites are visible. Head lice infestations, unlike body lice infestations, are generally harmless. Excessive scratching can lead to open sores and infection but, especially when the condition is treated, this is rarely a problem. Click here for information on how to diagnose and treat head lice.