While termites are commonly referred to as “white ants,” particularly throughout Australia, they are not related to ants – instead, they are part of the cockroach family Blattodea. Termites prefer to feed on dead plant material known as cellulose, usually in the form of leaf litter, soil, or wood. There are 2,600 taxonomically known termite species, but scientists estimate that the actual number of species is closer to 4,000. As pests, termites are of great economic significance since they harm crops and forests, and as they are capable of causing serious structural damage to wooden buildings.

Like ants and bees, termites are eusocial insects. They participate in cooperative care of their young, they employ division of labor tactics, and one generation overlaps with the next. These are very busy insects – the problem is that rather than making honey like bees do, they’re often busy damaging valuable property.

Almost all termites have similar life cycles. Each colony has only two active reproductive members; the king and queen. King and queen termites are fed by other members of the colony, and some have been known to live for more than 20 years. In laboratory conditions, queens have been shown to live up to 50 years, making them one of the longest-living known insects. Their sole purpose is to breed new termites, which they do at a rapid rate. A single mature queen is capable of laying thousands of eggs annually.

Termite eggs have a two-week incubation period. During this time, worker termites tend the eggs carefully until nymphs emerge. The termite nymphs are then fed by attendants, which regurgitate food for them for a period of two weeks. After molting, the nymphs are transformed to workers, soldiers, or supplementary reproductives, or primary reproductive destined to become queens and kings.

How to Identify Termites

How can you tell if you have a termite problem? One of the first methods for determining whether a termite infestation is present is to simply watch for termites. These insects are easy to identify, but it can be difficult to actually lay eyes on them since they rarely emerge from a food source once they begin tunneling through it.

There are many different signs of termites, and there are also a number of methods for preventing them and exterminating them. Termites cause billions of dollars-worth of damage in the United States every year. These insects are capable of destroying buildings at a surprisingly rapid rate – in fact, a colony with about 50,000 workers is capable of consuming a twelve-inch long two-by-four in the span of eight to nine weeks. In homes that are left untreated, total destruction occurs in an average of ten to fifteen years. If you believe you have a termite infestation, be sure to take it seriously. 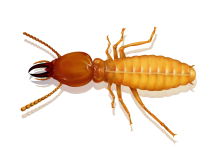 Formosan termites (also known as Formosan subterranean termites) are an invasive termite species that originally ranged throughout southern China, Japan, and Formosa (now known as Taiwan.) Sometime during the 20th …

Why Do Termites Swarm?             Springtime usually brings chirping birds and warm fragrant air with it, but for many unlucky property owners, this time of year brings swarming termites, too. Just … 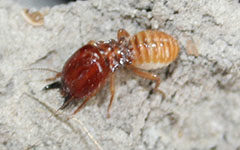 Termite control is easiest when that control is based on prevention rather than on working to get rid of termites. The first step in preventing these destructive pests is to …

Winged Termites Winged termites aren’t a specific termite species; rather, this term describes reproductive termites that have emerged from one colony in search of a new site in which to …

How to Identify Flying Termites Flying termites are often mistaken for flying ants, and vice versa. Both insects look very much alike, however flying termites have only two body segments; …

Despite the fact that termites – particularly termites with wings – look an awful lot like ants, the two insect families are not closely related. Termites are actually cousins to …

Although there are methods for eliminating termites on your own, a large, out of control termite population is best handled by a professional termite exterminator. Though there may be many … 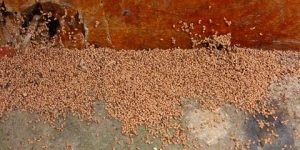 Some insects leave very little evidence behind. Not so with termites – these pests leave lots of evidence in their wake. Unfortunately, some of the signs of termites include the …

Drywood termites destroy wood structures faster than subterranean termites; this is due to the fact that they do not require much moisture to survive, and they prefer to spend nearly …