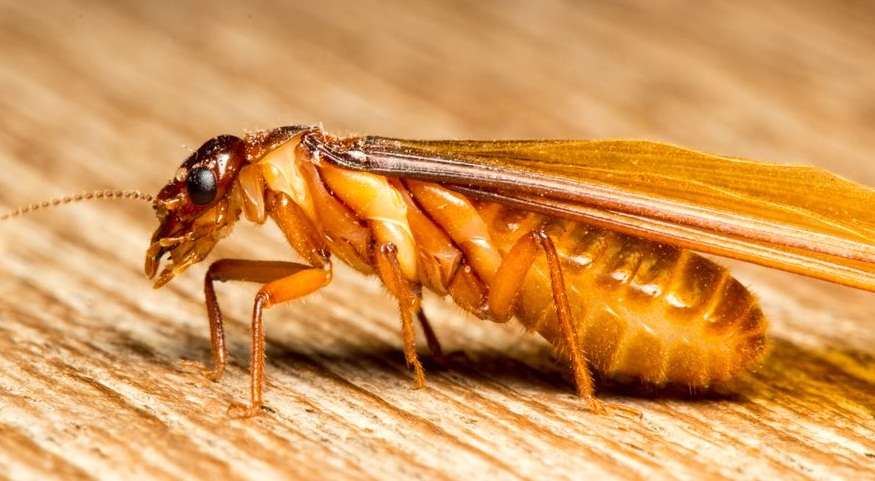 Winged termites aren’t a specific termite species; rather, this term describes reproductive termites that have emerged from one colony in search of a new site in which to begin raising a colony of their own. Finding termites with wings either in a home or elsewhere on your property is almost certainly a sign that an infestation exists. These termites are either on their way out of a large reproductive colony that’s hidden from sight, or they are just getting settled and preparing to begin destroying structures and other wood items.

Besides a colony’s king and queen, subterranean winged termites are the only members of the colony which are capable of reproduction at any time. They are the most physically advanced of the three termite castes, with dark-colored bodies encased in a chitin shell and functional eyes, subterranean termites with wings are equipped to leave the nest once they mature. Measuring about a centimeter long, these termites swarm during daylight hours. This normally happens between February and April, although swarms will occasionally be spotted during the fall.

Winged subterranean termites need moisture and food, which consists of cellulose plant fibers like those found in wood to survive. Keeping structures dry and clear of both moisture and brush is one of the best ways to prevent these pests from setting up house on your property.

While subterranean termites with wings are prevalent throughout much of the United States, winged drywood termites are most often found throughout the coastal Southern states, the southwest, and in Southern California. These termites look almost identical to other species’ reproductive termites, so until you discover additional signs of a termite infestation, it’s difficult to tell which species you are dealing with, particularly if you live in an area where various types of termites thrive.

Winged drywood termites need much less moisture to survive than other species do; one of the most prevalent signs of infestation is the presence of frass, which is excrement that looks like tiny pellets of sawdust. Look for cracks in walls and near window casements, which could serve as entry points, and be particularly vigilant about preventing cracks and holes from developing anywhere else around your home’s exterior. If swarming drywood termites cannot find an entry point, they’ll typically look for a different place to begin a new colony.

Winged Formosan termites need warmth to swarm and survive, and their eggs need warm temperatures to hatch. Like drywood termites, this species is rarely encountered in northern climes. Formosan termites with wings have yellowish-brown bodies and like other reproductive termites, their wings are approximately twice the length of their bodies. These winged termites usually emerge between April and July. They prefer to swarm in the evening, and they appreciate humidity. They also find light attractive; it’s not uncommon to find these pests around outdoor light fixtures, or looking for a way to get into windows and doors where light is present.

Of all termite species found in the US, Formosan termites are most destructive. This is because they build massive colonies that extend through structures, into trees and woodpiles, and even into underground chambers. If you believe that you’ve seen Formosan termites with wings, treat the event as an urgent one and take steps to handle the problem right away.

If you’ve seen winged termites, the next step you should take is to carefully inspect your property, and to look for signs of termite infestation. Next, determine whether you can undertake termite control measures on your own, or if it’s time to call in a professional termite exterminator. Be sure to spend a few minutes reading the information we’ve prepared on how best to handle a termite problem; it’s not always necessary to spend a lot of money, and if you’re just now seeing winged termites, you’ve got a good chance of eliminating them before they settle in.