Skip to content
STOP The Fleas > Fleas > Types of Fleas

There are thousands of different species of fleas throughout the world, here are the most common ones that are in America. These creatures attack both pets and humans and inhabit their furs, our hair, and homes.

Cat Fleas- These are the most common type of flea, at least here in America. Cat fleas live on cats, dogs, and numerous other animals, they are the common fleas found on our pets and inside our homes. They love laying eggs and infesting the carpets, curtains, furniture and entire households as well as the pets. The Pawsome Kitty has an extensive guide the best cat flea treatment for cats

Chicken Fleas – As their name implies, these fleas love infesting and living on chickens. They live and breed in the chickens coups, and attached themselves with their heads buried into the skins of the chickens. They can be seen around the faces and heads of the chickens when examines closely, as they appear as blackheads, or small black nodules. When you enter a coup to gather eggs, or clean it, or even to simply visit your chickens, you can become a temporary host for these biting pests.

Oriental Rat Fleas – As their name implies these fleas were brought to Europe and America onboard ships from the orient. These are the nasty fleas that were responsible for the great black death (plague) incident that killed millions, it is estimated to have killed 30% to 60% of Europe’s population. These fleas are now common in America in coastal towns, and cities, and even along rivers. They often infest not only rats, but raccoons, opossums and other animals that live near these same areas. If you go fishing, and find a flea crawling on your arm, or some other place, it will probably be an oriental rat flea. 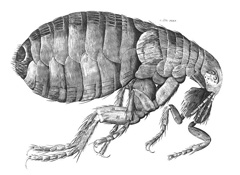 Human Fleas – Most folks will tell you people do not become infested with or get fleas! This is not true at all, in fact there is a species of flea called the: Human Flea. It looks very similar to any other flea, except under a microscope. This type of flea likes to infest the hair of humans, it easily finds a host by hiding on the backs of seats of buses and other vehicles, and hitching rides in the hair of new passengers. These fleas love to infest hairy areas of people such as the heads, under the arms and other areas. They live quite well on people, and gorge themselves off the blood. Human Fleas are not that common anymore, thanks to better hygiene and cleaning methods, but they are still out there. 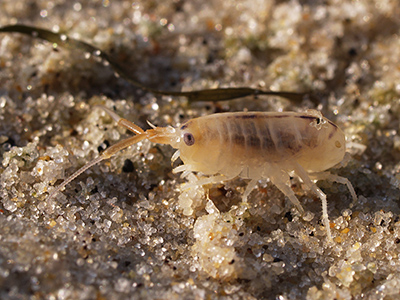 Sand Fleas – These are the little villains that often bite your ankles when at the beaches. When you lie down on the sand, they will bite any body part that is close to the ground. They are one flea that looks different then most others, in fact their appearance is more like that of a very tiny shrimp-like creature. Sand fleas feed on organic and dying plants, especially seaweed that washes up on a beach. If you are near the beach, these fleas may be found any place there is sand, but if there are little piles of washed ashore seaweed, or other vegetation, this is a hotspot to pick up some sand flea bites.

5 thoughts on “Types of Fleas”